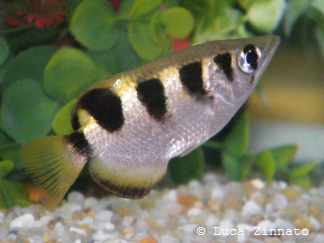 Superpowers, such as the ability to boost up muscular power at will, are usually associated to imaginary beings like superheroes. Surprisingly, some living beings are endowed with similar powers. A recent study, published in PLoS ONE by researchers of the University of Milan, shows that archer fish are able to achieve a stunning boost of their muscular power.

Archer fish are known for their ability of shooting down aerial insects anchored to vegetation by hitting them from a distance with a precisely aimed jet of water. The analysis of high-speed video recordings reveals that the impact of the jet with preys is way more powerful than what bare muscular power would allow, thus apparently defying the laws of physics. The study demonstrates that archer fish make a subtle use of the laws of fluid dynamics to produce a liquid projectile that grows in size during its travel to the prey, leading eventually to a striking impact with the prey.

The archer fish represents a notable example of animal making use of a highly sophisticated external tool – in this case a hydrodynamic lever – to amplify muscular power, just like an archer would do with his bow. In retrospect the genus name Toxotes (Greek word for archer), originated by their ability of shooting darts of water, appears to be farsighted and well deserved.