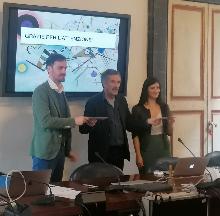 After the ATLAS Thesis Award another important recognition for Dr. Stefano Manzoni, former graduate student of the University of Milan and of the Pierre and Marie Curie University of Paris and associated with the INFN section of Milan: Stefano is the winner of the Conversi award, annual prize for the best doctoral theses in the area of particle physics research, awarded by the First National INFN Scientific Commission. With this award, the National Institute of Nuclear Physics intends to commemorate the figure of Marcello Conversi (1917-1988), a distinguished physicist who, together with E. Pancini and O. Piccioni, carried out a fundamental experiment that brought to the discovery of the muon and that in fact marked the birth of High Energy Physics.

In his thesis work, Stefano analyzed the data of proton-proton collisions collected by the ATLAS experiment during the first two years of the second run of the Large Hadron Collider. Stefano played a fundamental role in measuring the mass of the Higgs boson in the two-photon channel, in the search for new physics in the two-photon channel and missing transverse momentum, the optimization of the electron and photon energy calibration and the measurement of the rate of electrons identified as photons.

From September 2018 Stefano obtained a post-doc fellowship at the NIKHEF laboratory in Amsterdam and now works on the measurement of the self-coupling of the Higgs boson by searching for double-Higgs production in the WWbb channel and in the re-interpretation of the results of single Higgs production.

In the photo Stefano Manzoni and Camilla Vittori (University of Bologna), ex-aequo winner of the award, together with the INFN president Fernando Ferroni at the official award ceremony held in Rome on May 27, 2019.